The coming year is poised to be a good one for hip hop, in that a lot of big names that have been rattling around the industry are due for another production- and more importantly, they are due to break from some of their past work in big ways. We took a look at three artists to watch in 2018, with the focus on artists in a position to explore a new artistic direction.

A$AP has been absent from solo album production since At. Long. Last. ASAP in 2015, but has been heavily involved in collaborations with the rest of A$AP Mob, as well as notable recent features with Ty Dolla $ign and Famous Dex. However, his recent SoundCloud releases, “5ive $tars” and “Above” look like they could be the first single of a coming album, already much teased from Rocky. If “5ive $tars” is anything like that to follow, then we could be in for a treat. The single contains an almost unbelievably raw sound, in that A$AP sounds as if he has no effects on his voice whatsoever. The recognizable voice of D.R.A.M. also makes an appearance, suggesting more work from the previous collaborator with Rocky. The upcoming album, rumoured to be titled Testing, apparently looks to explore new sounds, so consider this single a sign of original things to come.

Although Chance has put out little in the way of serious suggestions for his next work, it wouldn’t be surprising to see him producing another album by the end of 2018. Although most would be excited to see a new Chance production regardless, it is likely that this coming work will be a fresh, redefining look. Chance has been quoted as saying that he thinks that, “whatever this album is, it wouldn’t be so centered. Acid Rap and 10 Day and Coloring Book was like a trilogy in itself. One aesthetic, one goal. Whatever my next thing is, it’ll be a bit bigger.” Also look for the next work to be an album, and an album proper – as in one that you have to buy. The reason? Chance told Complex that it’s too difficult to chart when you rely on streams as opposed to album sales. What does this mean for us? Something bigger, something different, and if I am correct, something that we will hear word of by the middle of the year. 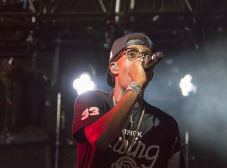 Alright, this one is a little different than the previous two, but Quan is poised to produce something serious in the next few months. Recently signed to Motown records, Quan has already discussed his impending debut album, Rich As In Spirit, with a variety of sources, and we can expect it in early 2018. Its focus is on his journey through the Atlanta rap game, where he recognizes the value of hustle and hard work over the hype of money. All of this sounds remarkably thoughtful, and perhaps could signal a fresh take from an artist we haven’t heard from in awhile. This is assuming we can understand what he’s actually saying when he opens his mouth… In the meantime, have a listen to his new single, “Changed,” where he addresses his remaining the same through the fame.