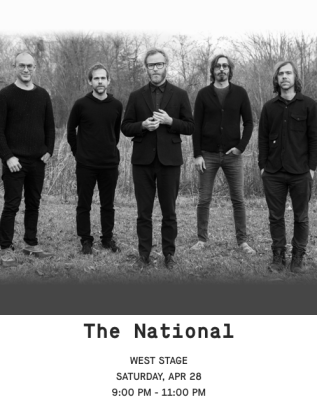 Those of us that are festival veterans know what is in store when the list of bands for a festival is announced. You end up getting very excited to see all the bands, but then realize there is the inevitable horrible conflict when the festival organizers schedule your favorite bands to play at exactly the same time three quarters of a mile away from each other.

Happily, this is not the case with the Homecoming festival hosted by the National in Cincinnati the last weekend in April.  See the Information and Schedule.

In fact, Homecoming has done the opposite, making sure that bands don’t overlap. For example, if you want to see Feist and Alvvays on Sunday, no problem! Feist plays at 7:00 p.m. – 8:00 p.m. on the West Stage. Alvvays plays from 8:00 p.m. – 9:00 p.m. on the East Stage. (Homecoming hasn’t released the map of the park yet, but the stages shouldn’t be too far away.)

Avoiding bands playing at the same time is a huge bonus. Even if you have to sprint from one stage to another, you won’t miss much of a band’s set. It is much better than, say, Lollapalooza where for years my favorite bands would be playing at exactly the same time in what seemed like an entire state away. Getting across the vast expanse of the festival grounds entailed running a gauntlet of port-o-pot lines, napping-on-the-grass attendees and over-priced food vendors.

Homecoming should be cheered for not only scheduling a great line-up, but also for ensuring that all bands in the line-up have the opportunity to be seen by attendees!

Don’t forget about the great non-music activities at Homecoming also. Other events include an installation by ‘A Lot of Sorrow’ collaborator and Icelandic multimedia artist Ragnar Kjartansson at the Cincinnati Art Museum; a premiere of the Cincinnati Ballet with Eighth Blackbird, New York star Justin Peck, and Bryce Dessner; and a special photography exhibition featuring The National, to name a few.

We are really looking forward to this festival, and will provide a full recap of what looks to be a fantastic event!