The National’s Homecoming festival was designed with grownups in mind. Not a “see and be seen” festival like Coachella, Homecoming focused firmly on music. Organizers did things that are unheard of at other festivals which cater to a younger demographic, like serving beer and energy drinks in cans. There was no fear that cans would be hurled at the musicians at Homecoming!

Saturday started strong, with Brooklyn’s Lanz Projects. They treated attendees to an interesting mix of electronic and indie tunes.

Over on the West stage, Lord Huron brought the rock, and began their set with their new single “Ancient Names (Part One).” They gathered an increasingly large audience as they played their captivating indie tunes.

The Breeders looked to be having a great time, and it was a family affair. Not only were the two Deal twin sisters on stage and beaming, but their brother was in the audience. Their set included songs from their new album, which was recorded in nearby Dayton, Kentucky. The sisters pointed toward the studio where they recorded, and said they could see it from the stage. 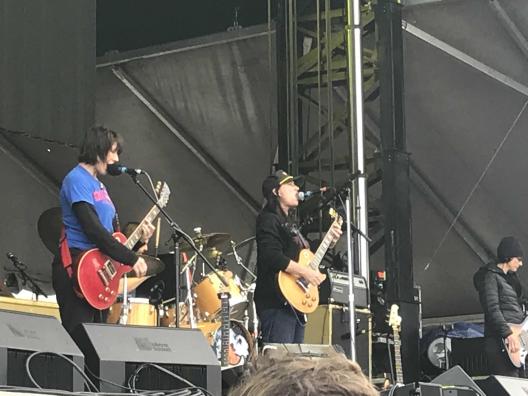 Unlike his 2015 Lollapalooza appearance, Father John Misty lead singer Josh Tillman was mostly quip-free during his performance. At that Lollapalooza Tillman said, “you guys ready for a …. ballad? That’s what gets you the 2:30 PM slot.” He played many of those same ballads, but at his Homecoming 7:00 p.m. slot. Happily, the band also played two just-released new songs, including the hilarious “Mr. Tillman.”

It was dark by the time The National hit the stage for their headlining set. And, like the Breeders, it was a family affair for the National too, with Matt Berninger’s mother at the show. Matt must be getting prepared for Mother’s Day, since he played what he said was his mother’s favorite song. In one notable moment, Matt jumped into the audience and ran to the bar and poured himself a drink. Our photographer managed to grab an image of Matt as he sprinted by.

Non-music activities were successful as well. Some food lines were long around dinner time, but most moved quickly. The ability to pay with a credit card was a plus. The only hiccup were the long lines to get into the festival Saturday afternoon.

The sun made frequent appearances. It was refreshing to occasionally be chilly rather than overheated at an ostensibly summer music festival.

Sunday afternoon performers included Lisa Hannigan, who sang beautiful songs, some acapella, and others with a strummed guitar. The bright sunlight and warmer weather on Sunday were a perfect fit for Lisa’s songs.

Future Islands lead singer Samuel T. Herring was on fire. After not playing a show for 4 months, they lept back into performing, turning in a blistering set with Herring’s signature (and meme-friendly) dance moves. At first glance, Herring looks like an average suburban father, but when the music starts, he transforms into something akin to a physically thicker Iggy Pop. His passion and energy were in no way diminished by the extra pounds he said that he put on during their hiatus from live performance. 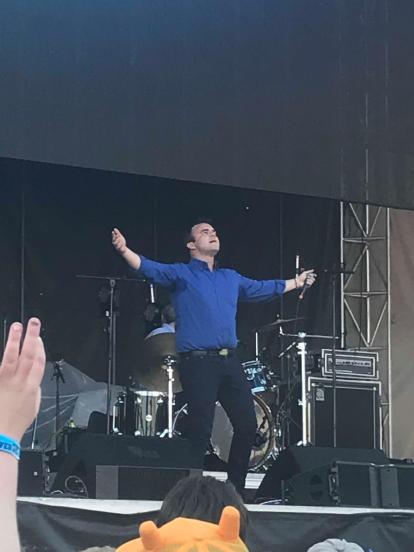 Given her bright orange outfit, Feist could be seen across the expanse of the stage. She mixed older and newer songs into a captivating set that drew a large crowd.

Alvvays, the fresh-faced band from Canada, capped Sunday’s music on the East stage. They played to a rapt audience who clearly came to hear the songs from their recent album, as well as some old favorites from their debut. Many in the crowd sang along. Lead singer Molly Rankin greeted a fan who brought a home-made sign, to his obvious delight.

The members of the National were clearly not stressed about performing “The Boxer” in its entirety during night two. Unscripted and uninhibited, Matt Berringer’s anecdote about his father’s lone dance move was both funny and charming. I wasn’t sure if the hometown heroes could carry headlining two nights in a row. It was shown unequivocally to all in attendance that not only could they pull it off, but they also ruled the stage with fantastic songs and a sense of humor. The National’s Homecoming was a festival to remember!