As she took the stage at the Black Cat in Washington D.C., Perth-native Carla Geneve joyfully exclaimed “I was Abraham Lincoln today!” With a chorus of laughter following from the crowd, Carla dutifully jumped right back into another song from her set. It’s this excitement and sense of wonder which makes Carla’s songs so powerful and relatable.

Carla Geneve is another wonderful new artist from Australia, whose music scene is increasingly permeating over into American airwaves. With hints of more established Australian artists such as Courtney Barnett and Camp Cope, Carla produces a live set which draws on classic singer-songwriter, with a fun modern spin. Armed with only her guitar on stage, Carla was able to put her clever songwriting, touching lyrics, and powerhouse vocals on full display.

Carla Geneve is in the midst of a tour with Australian indie pop band San Cisco across the entirety of the United States in support of her self-title introductory EP, released at the beginning of June. With only a handful of songs previously released, her new EP has provided fans a much-needed dose of new music and served as the basis of her live set, along with established singles such as Greg’s Discount Chemist.

When listening to Carla perform live, her voice immediately stands out, both for its strength and rawness. While she obviously has the talent to bring the house down on any given note, her ability to use it is what makes her truly special. Carla sings with a restraint and control which belies her younger age. Rather than belt out every note, she masterfully picks and chooses her spots to let her voice fly, making those moments even more powerful.

Carla performed alone on-stage Tuesday, reinforcing her towering voice with strong guitar work and dynamic shifts. On fan-favorite Listening, Carla alternates between quiet picking and slashing riffs to emphasize the song. Another standout song was 2001, as she sang about how she uses the memories of books and movies from her childhood to help stave off the loneliness and boredom of life. 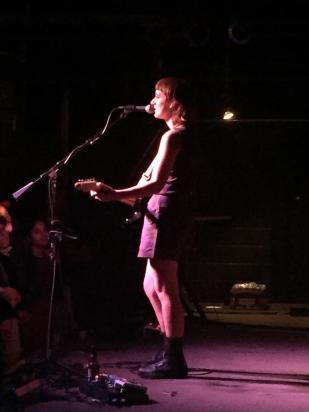 With her relaxed style and emotional lyrics, it seems likely that Carla Geneve will be a force among the music scene for years to come. With her first American tour finishing up, we here at festivalpulse are hoping it won’t be too long until she is back in the States for another set!