Preparations are underway for High Water Fest, set to take place over the weekend of April 21st and 22nd on the banks of the Cooper River in North Charleston’s Riverfront Park. Produced by AC entertainment and Shovels & Rope, the fest hopes to draw even larger crowds in its second year.

The weekend is jam-packed with heavyweight indie-folk favorites. Jason Isbell & the 400 Unit headline the festival, coming off their critically-acclaimed 2017 album, Nashville Sound (#1 in Festival Pulse’s Top 10 Albums of 2017). Band of Horses claims the other headliner spot, with their hammock-acoustic rock fully featured on their 2016 album Why Are You Ok?

Charleston-based folk duo Shovels and Rope will also be attending the fest, along with Washington-born American folk artist Brandi Carlile, touring on her forthcoming album By The Way I Forgive You.

High Water also has a deep undercard lineup, with St. Paul and the Broken Bones, Hamilton Leithauser and Old 97’s among many others heading down to Charleston for food, drinks and libations throughout the weekend.

Taste authentic Charlestonian dishes with Pass the Peas. Learn more about the best techniques and practices in local aquaculture in an oystering workshop. Low Tide Social offers attendees classic low country boil, as well as desserts from local restaurants and an individual performance by Shovels and Rope.

Weekend passes start at $159.50 and can be found at the High Water Fest site. 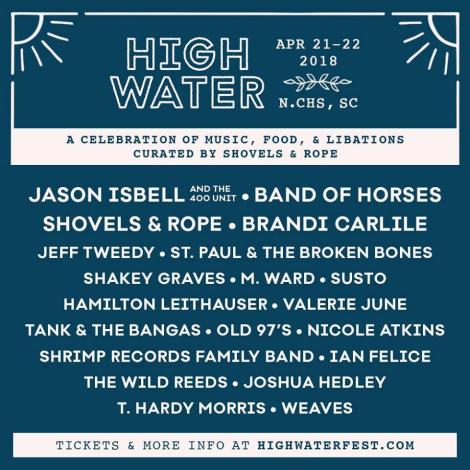 While you’re here, check out the full schedule of festivals on Festival Pulse’s Spring Calendar and our recent review of the Bonnaroo Lineup.